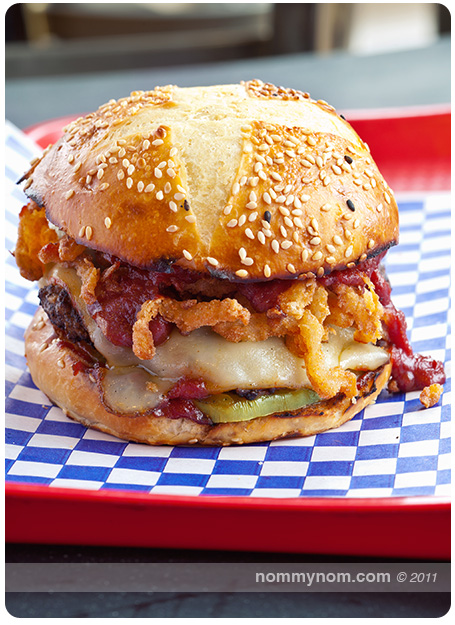 What is that visage of Burger Heaven you see above?  It is the ***Kelly Cline’s Secret Squirrel BBQ Burger. I can die a happy woman now that I have had the honor of having a burger named after me.

There is a long story behind this burger… it starts back in the Summer of 2010 (I know… that’s like eons ago!)
Let me start out by saying that over the past year I have become friends with the folks at Blue Moon Burgers, it’s a fun place with fun people and they make a damn fine burger – and I’m a bit of a burger snob.

In fact, over a few weeks I taunted them with my own recipe for a killer burger and brought in a jar of my Secret BBQ Sauce.  Now this is a formula that I have been working on and tweaking since I was 20.  We aren’t going to say the amount of decades that have passed since then, but let’s just say that I am pretty confident that I have perfected my formula for the perfect Sweet ‘n’ Smoky BBQ Sauce.   Whenever I make my sauce, I make it 2 gallons at a time because I end up with my friends lined up with empty jars in hand ready for a refill.

So back to the day I brought in the sauce… they took a taste of it and the look of doubt was wiped clean and they sat there with just a spoon and the jar and literally ate it right out of the jar.  It was good.  I was pleased.  Now fast forward… every couple of weeks I would get an email asking for the sauce recipe, requests that I would deny over and over again.  My sauce is special, it’s my baby… the recipe is Super Secret Squirrel!  No one knows the recipe but me!  Asking, turned to begging… and I gave in and gave them the recipe and they asked me to help create a burger to showcase the sauce.
For Blue Moon Burgers side of the story of this burger check out it out here: March Burger of the Month

After months of back and forth and consulting and tasting (it’s a tough job, but someone had to do it!) we came up with the Kelly Cline’s Secret Squirrel BBQ Burger.
5 ounces of grass fed organic beef patty dusted with my Secret Dry Rub on a grilled Macrina bun, housemade spicy pickles (I like having an extra one on my burger), crispy shoestring onions, melted Muenster Cheese all topped off with a smothering of my Super Secret BBQ Sauce.

The folks at Blue Moon Burgers came up with a March classic Mint Shake (made with their house made syrup made with REAL mint) and some Old Bay Hush Puppies to saddle up next to that big beautiful burger that bears my name. YUMMY!

So what the heck does all this burger talk this have to do with bloggers?  Well… I’ll tell ya!
Blue Moon Burgers will be hosting a “Meet the Puget Hound Bloggers” event at their Fremont Location where I will be hanging out with fellow Puget Hound bloggers.
Puget Hound is a collection of local area blogs that cover everything from Sports, Crime, Food, Events, Music, Arts, local Travel, Dating and so much more.  Come on down and meet some of the other talented bloggers like the man behind Another Passion and the mixologist behind ThirstQuest.

***Despite the name, there is NO squirrel in this burger.  The name comes as a reference in homage to an old late 1960’s cartoon.  Everything that has ever been secret in my life since watching this cartoon as a kid has always been referred to as “Secret Squirrel”

Full disclosure: I have received no compensation from any business or organization mentioned for this article, except a free burger or two (which makes my ever expanding hips weep)